What is Soil Resistivity Test and How is the Testing Done 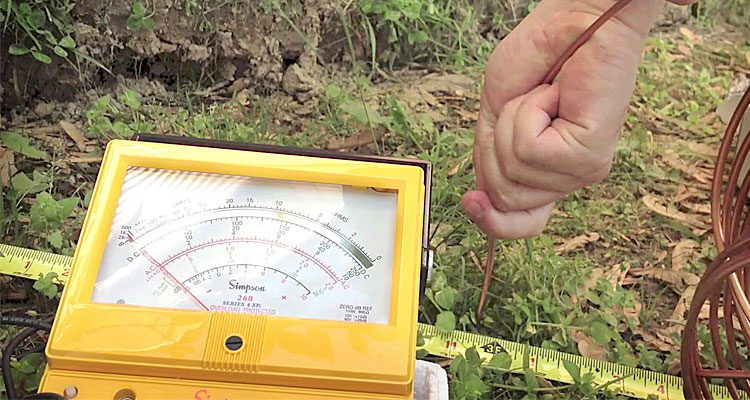 The resistance of an earth electrode is related to the resistivity of the soil in which it is placed and driven, and thus soil resistivity calculations and measurements is a crucial aspect when designing earthing installations.

The property of resistivity can be defined for any material and is done so by the American Society for Testing and Materials (ASTM), which publishes standards for testing and measurement. When applied to soil, resistivity is an indication of a given soil’s ability to carry electric current.

The flow of electricity in the soil is largely electrolytic, determined by the transport of ions dissolved in moisture. An awareness of soil resistivity at the determined location and how it varies with various factors such as temperature, depth, moisture content etc. gives us an understanding of how the wanted earth resistance value should be obtained and retained over the lifespan of the installation with least cost and trouble.

Why Testing the Soil Resistivity Important?

A major aim of grounding system is to set up a shared reference potential for the building structure, power supply system, electrical conduits, plant steelwork, and the instrumentation system. To achieve this objective, a suitable low resistance connection to earth is desirable. However, this is often difficult to achieve and depends on a number of factors:

The purposes of soil resistivity testing is:

Soil resistivity influences the plan of an earthing system absolutely and is the major factor that decides the resistance to earth of a grounding system. Thus before designing and installing a new grounding system, the determined location should be tested to find out the soil’s resistivity.

What is Done During the Testing of Soil Resistivity?

The results, if adequate investigation is not made prior to the test, or the test is not correctly undertaken, may be incorrect or misleading. To overcome these problems, the following data gathering and testing guidelines are suggested:

Note: Temperature and moisture content both become more stable as distance below the surface of the earth increases. So, to be operative through the entire year, a grounding system should be fixed as deep as possible.

Following are the steps usually performed during soil resistivity testing:

Factors such as maximum probe depths, lengths of cables required, efficiency of the measuring technique, cost (determined by the time and the size of the survey crew) and ease of interpretation of the data need to be considered, when selecting the test type. Three common test types are

Soil resistivity can differ considerably both from 1 location to another and depth at a site, and single soil resistivity quantity is generally insufficient. To get an improved image of soil resistivity difference, it is sensible to perform a thorough survey. A Line Traverse survey is inexpensive and easy to find differences in soil resistivity at a location and can give considerable money savings, in terms of labour and material, when trying to obtain the necessary resistance value.

The limit of spacing determined involves précises close probe spacings i.e. less than 1m, which are necessary to find out the upper layer resistivity, utilised in quantifying the touch and step voltages. Bigger spacings are utilised in quantification of grid impedance and remote voltage gradients. Calculations at huge spacings usually provide significant problems and they are vital if the bottom layer is of bigger resistivity, i.e. ρ2 > ρ1. In such cases considerable error is introduced if a realistic value of ρ2 is not measured due to insufficient spacing.

How is Soil Resistivity Testing Performed?

This test requires the user to place four equally spaced auxiliary probes into the earth to determine the actual soil resistance, traditionally in ohms-cm or ohm-m. This test must take place around the entire area to determine the soil value at all locations. This test is done at different spacing, 5 to 40 feet, to determine the resistance value at various depths. This knowledge will aid in the design and implementation of the correct ground system to meet the particular site requirements. Following are the steps done in measuring soil resistivity: