What is Grounding System Design and Planning, How is it Done 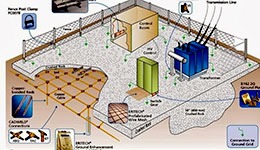 Grounding System Design and Planning starts with a site analysis, collection of geographic data, and soil resistance of the area. Generally, the site engineer or equipment manufacturers specify a resistance to ground number. The National Electric Code states that the resistance to ground shall not exceed 25 ohms for a single electrode. However, great technology manufacturers will often state 3 or 5 ohms, depending upon the requirements of their equipment. For sensitive equipment and under extreme circumstances, a one ohm specification may sometimes be needed. When designing a ground system, the risk and cost increase exponentially as the target resistance to ground approaches the unobtainable goal of zero ohms.

Once a need established, data collection begins. Soil resistivity testing, geographical analysis and test borings would support grounding design. Soil resistivity test using the Wenner 4-point method  suggested due to its accuracy. This method will discuss later in this chapter. Additional data  always helpful and can collect from existing ground systems placed at the site. For example, driven rods at the place can test using the 3-point fall-of-potential method or an induced frequency test using a clamp-on ground resistance meter.

With all available data, smooth computer programs begin to give a soil model exhibiting the soil resistivity in ohm-meters and at various layer depths. Knowing at what depth the most conductive soil located for the site would allow the design engineer to design a system to meet essentials of application.

This based on extensive belief that ground systems are a kind of “cesspool” into which unwanted electrical noises safely disposed. An approach defines that noise may “accumulate” if a big discharge path is not given. This is a false concept that is not based on sound electrical principles. Literally, noise or any unwanted signal will always take the path of lowest burden, a path which at high frequencies above 1 MHz is not the SRG but other nearby cables. The concept of the SRG as a noise discharge path based on fundamental misinterpretation of grounding principles.

Electrostatic discharge should concern to any data centre operator due to the risk of damage to equipment. The reason of data centres are usually maintained at high humidity such as 40% relative humidity is to obstruct formation of static charges. Floors in data centres should have static discharge treatment which may include the use of special fixed or raised floor tiles. Some data centres restrict the allowable footwear to prevent group from being efficient static generators. However, the SRG has no proper role in preventing creation of static charges or protecting equipment from these charges. The SRG cannot stop group from accumulating static charge. If an operator carries a static charge, the SRG cannot stop this charge from discharged into equipment.